Great times…shooting Hollywood in the 80’s and 90’s… 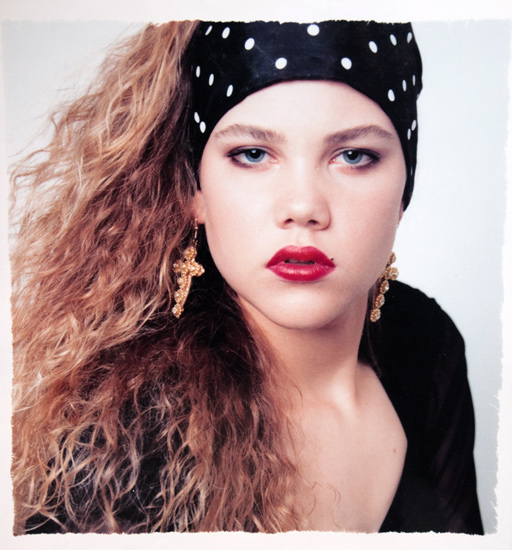 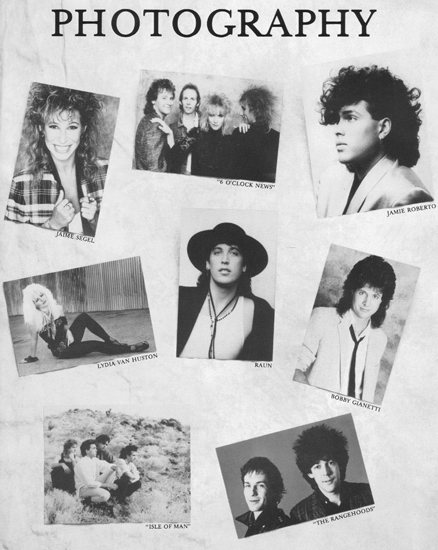 When I lived in Hollywood in the 90’s I shot for Bop Magazine. Here’s Jonathan Jackson who starred as “Lucky”, Luke and Laura’s son on General Hospital. 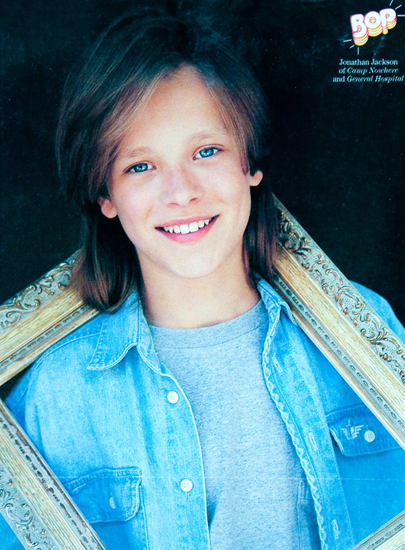 Headshots from my Hollywood days…Here is Christy Taylor, one of the Sirens in “Oh Brother Where Art Thou?” 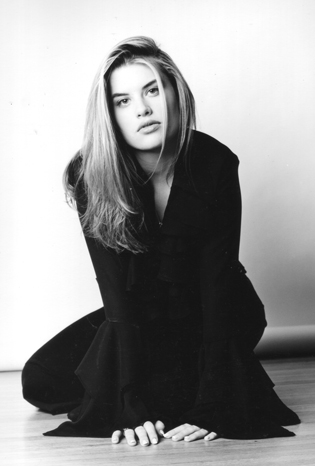 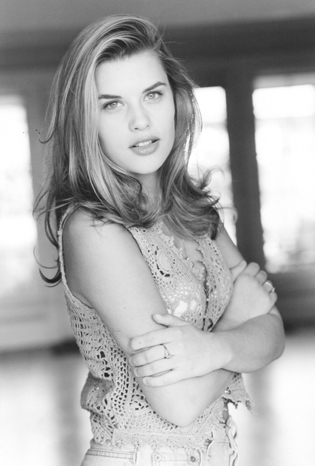 Before I started photography officially, I worked on Laverne and Shirley. This is Cindy’s Mom, so proud of her daughter!

I photographed actor children in Hollywood in the 80’s and 90’s. 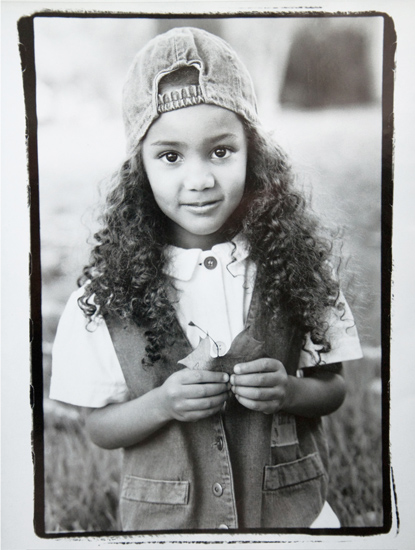 When the roller rink was the place to be…1980 something… 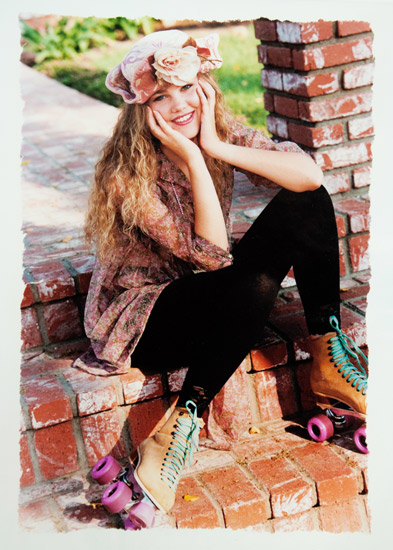 Heather Tom from the “Young and the Restless” and Edward G. Ackah-Miezah 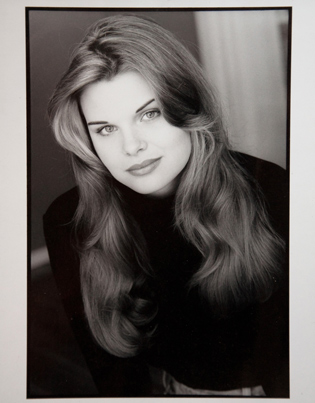 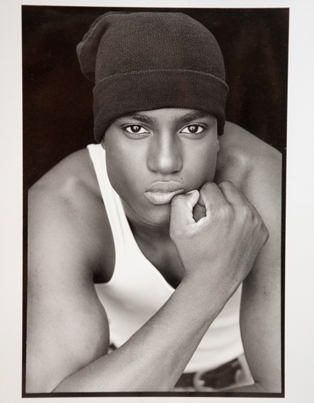 This is Robert, someone I shot several times… 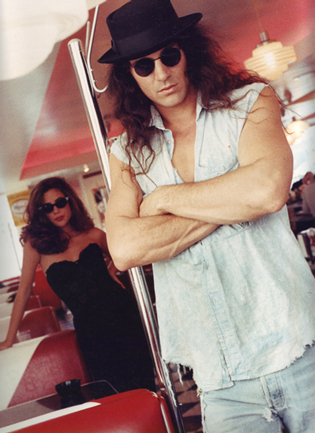 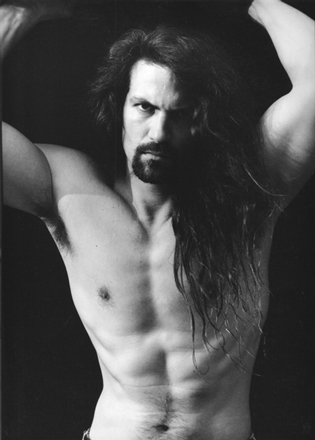 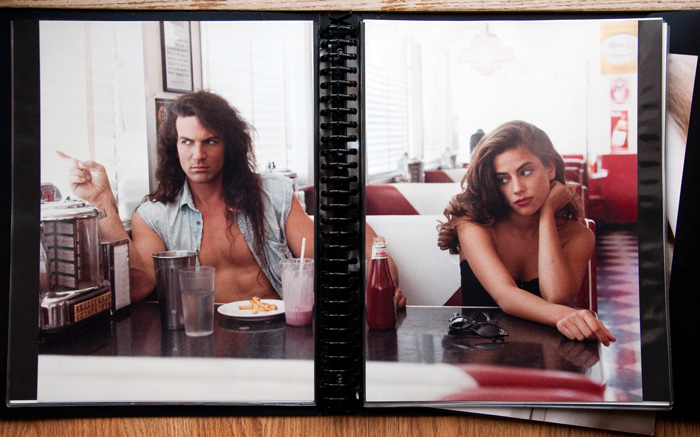 Recognize this young beauty? Demi Moore at the wrap party for “Blame it on Rio”. 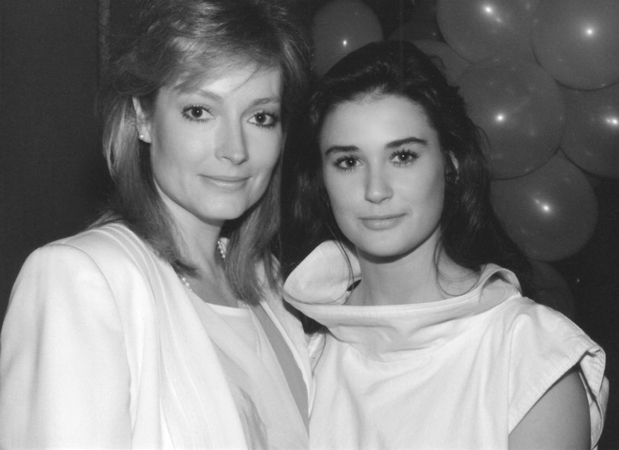 Right before I picked up a camera professionally I was personal assistant to Cindy Williams during the time she was on “Laverne and Shirley”. 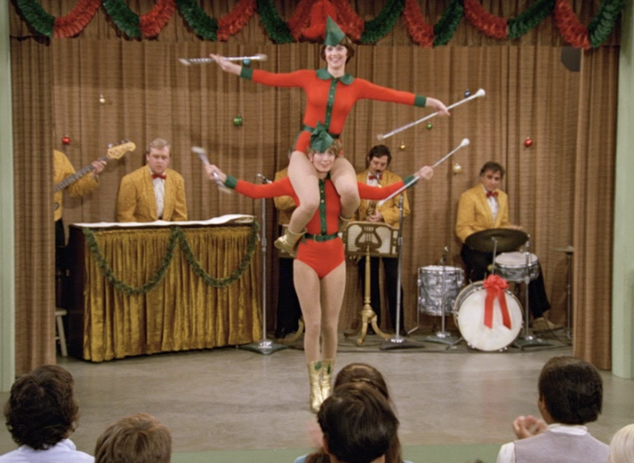 She hosted a party at her house and many celebs of the time came!
Below on the left is Dahila (Cindy’s housekeeper), Cindy, Stuart Margolin (“Angel” in the Rockford Files) and Lynne Marie Stewart (“the most beautiful girl in the world” from Pee-Wee’s playhouse). On the right is a girl who has had too much to drink (me) with David Groh (“Mary Tyler Moore” and “Rhoda”). 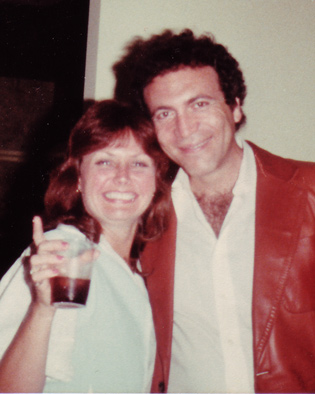 On the left, Teri Garr (Young Frankenstein) and producer Fred Roos (The Godfather). The party was so loud…the cops came and were kinda bedazzled when Cindy and Penny Marshall came to the door. 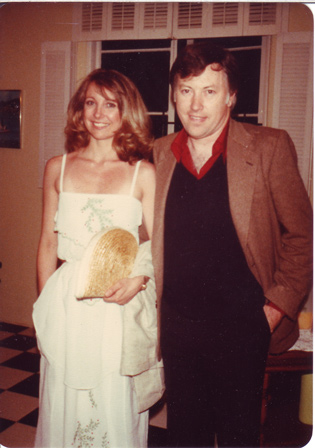 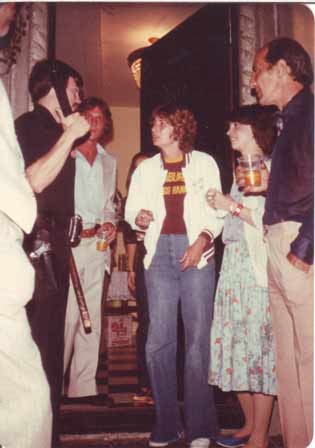 Charlie Martin Smith, Candy Clark, Cindy Williams and Ron Howard on the set of “More American Graffiti” 1978. I traveled to UC Berkeley to assist her on this film and I was cast as the “girl on acid in the fountain.” My scene was cut… 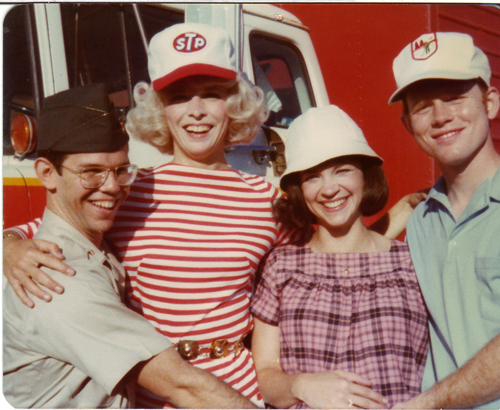 I started shooting in 1980.
Do you know Kevin Nealon of “Weeds” previously on Saturday Night Live? It was Kevin who gave me my start shooting actors in Hollywood in 1980. We lived in the same crazy apartment building and when he found out I was a photographer he sent me to his acting agent to start shooting actors! Kevin is a really likeable guy. Between acting gigs he was the bartender at The Improv and he was so personable. I shall forever be grateful to him for my start shooting actors.
I was so blown away by his agent’s office I took the photo below…which won Popular Photography’s “Day in the Life” for the state of California…1981. 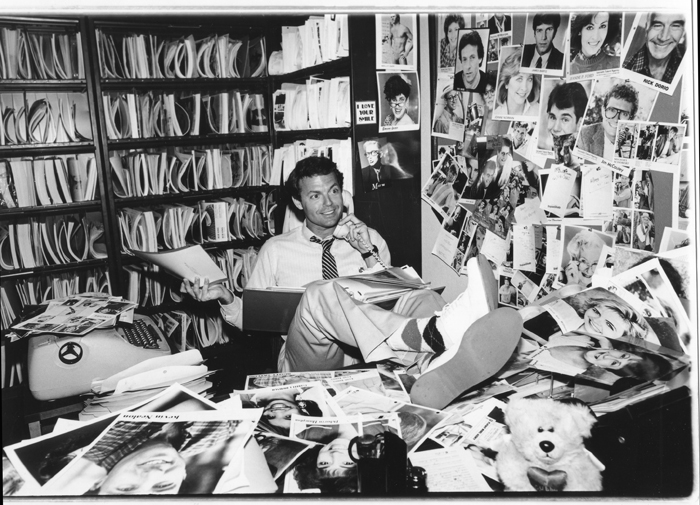 Jim Carrey on the set of HBO’s “Doing Time on Maple Drive” 1991.
I love Jim Carrey, but on this day he nearly drove me crazy. It was my assignment to get pics of him on the set. During the film they show family photos on the piano and on the walls and some of those photos are mine. I’m not sure Jim was ever perfectly in focus…he was moving forward and back really fast tormenting me and laughing like crazy! This was my job man!!! I finally made him sit down.
At this time he was doing “In Living Color” and doing the stand-up circuit on Johnny Carson, etc.
I lived a half block from the Comedy Store on the Sunset Strip and often saw Jim and others, like Andy Kaufman, test their crazy, CRAZY routines. 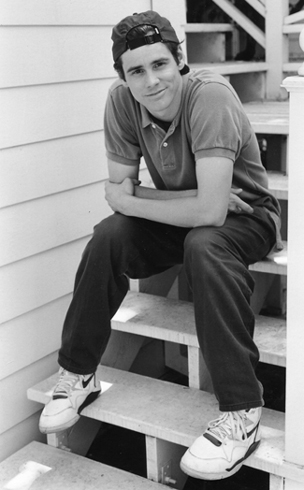 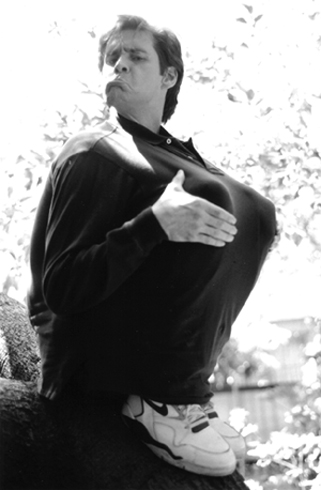 I never had to say “Jim, give me something!”.
This is not Jim’s real senior picture…I took it for the film. 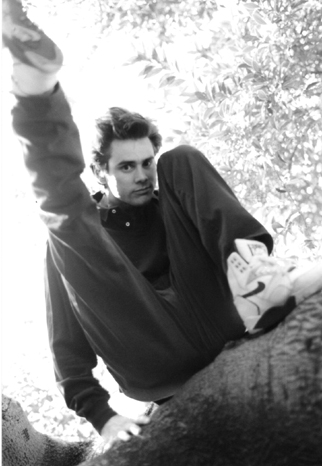 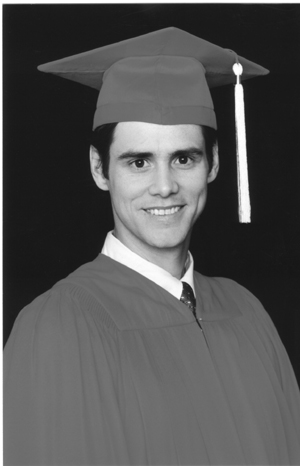 This was my very first success. I sold this poster sized image to a podiatrist for his office. I found the shoes in China Town, San Francisco. They were made of cardboard and very un-walkable.
They sat on my mantle through the 80’s. Did you have socks like this, aren’t they back now? 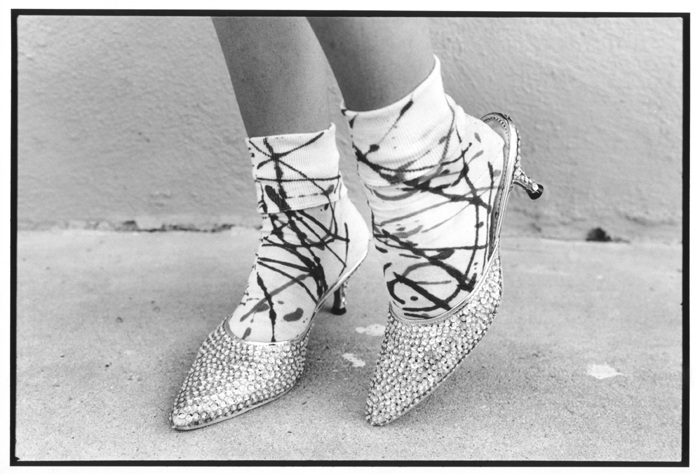 Continuing on with my early 80’s shoe bender is the nun cooling her feet in the pool. What gets me in this photo is the apartment complex behind her. Hollywood is full of these “around the pool” apartments, stucco with crank out windows. Everyone knows everyone’s business and there are alot of characters. I lived across the street and the comedians that lived in my building took baths in the pool. Yeah. 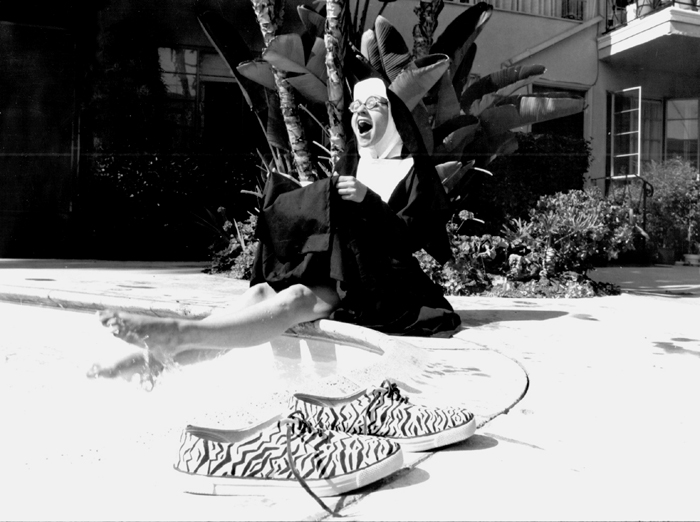 When I got my first 35mm SLR camera in 1980, it was my best girlfriend who courageously volunteered to be my model. I was on a shoe kick…hence the “jelly beans” on her hands. I guess we sorta liked Cindy Lauper too. These pictures make me laugh thinking about how I coached her into doing these things for me and how much we would laugh after. 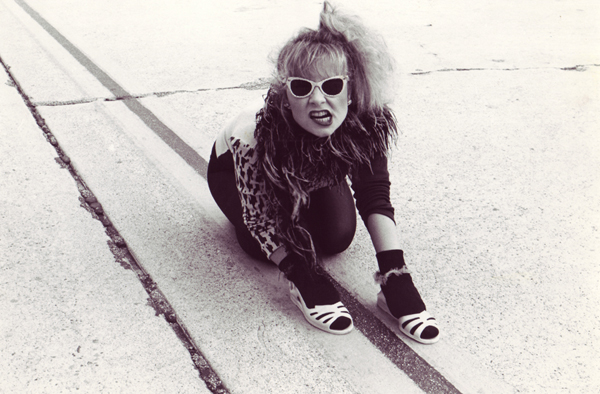 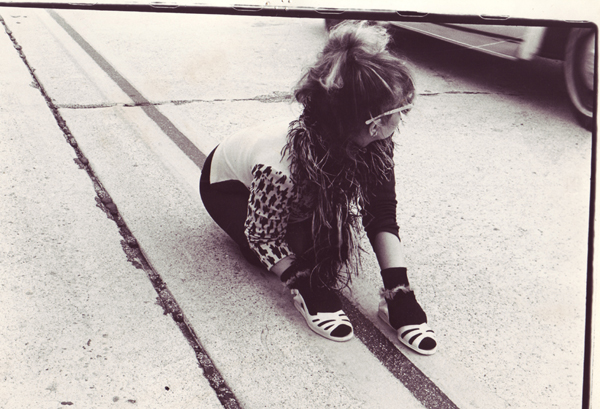 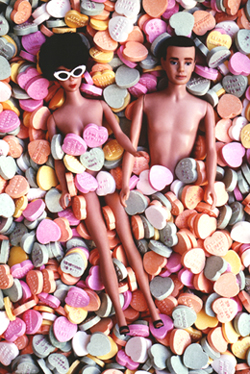 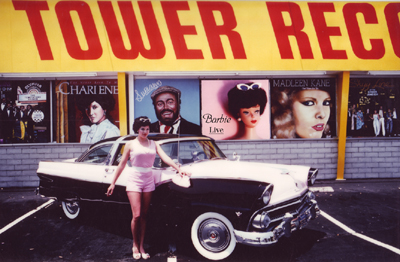 In the 80’s I photographed my Barbie Dolls in many different circumstances. Some I could never show…Mattel would not like it!
I sold the Barbie and Ken in the candy image to a greeting card company and the words inside the card were “We’re made for each other.”
The other photo was taken at Tower Records on the Sunset Strip.
I had some crazy ideas, but we were all trying to out-crazy each other in the 80’s.
I made the Barbie Album Cover on the building the old fashioned way, shoot,
cut and paste. 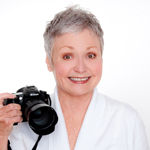